Our friends came in the night before to share our campsite and they rented a yellow tandem from Sea Quest. We picked it up, about 15 minutes from San Juan County Park, for the day.

Rental details: We had to fill out a detailed form to let them know someone in the party had experience. It cost $109 for the day. They gave us a plastic Wilderness tandem, weighing probably 90 pounds and super stable. Our only but important complaint is the back seat adjustment strap was broken so it’s occupant had a sore back by the end of the day and the rudder was too slack to use for turning (and being too flat for edging that left for effortful turns).

We launched from Small Pox Bay and headed south to Lime Kiln Point.

The light house is really fun to see from the water.

We landed at Dead Man Bay

And walked towards the lookout. 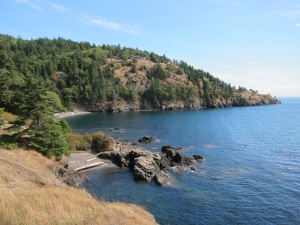 As we walked towards the light house we saw orcas again at the lookout!
It’s like they waited for us to land!! 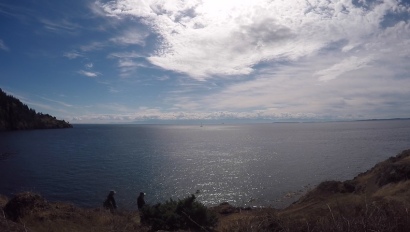 There are whales in these two pics, you just can’t see them with this level of zoom. 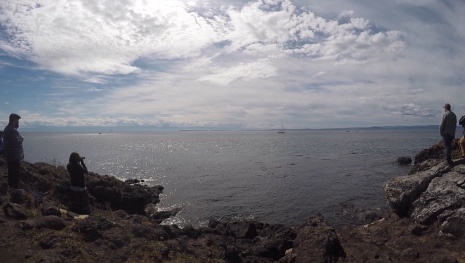 There are definitely orcas in this picture.

We hurried back to see if our friends wanted to launch but by then the small pod had gone by so we ate a snack instead. 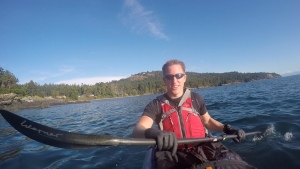 We kept our eyes peeled as we paddled back, hoping another pod would come by, but none did. There was, however, a pod of kayakers on tour!

Wanting to play a little longer we got out our never used tow rope to try it out. We paddled them against the wind without too much difficulty until one of them decided it would be funny to put her paddle into the water and add some drag. Twice!
I looked back to see her grinning maniacally, one paddle blade buried in the water, the other paddle blade high in the air.
What a great friend 😉 to give us resistance training.
When we got back we plotted out the next day’s route and made dinner, while watching a pretty sunset.

The deer came by to check our dinner out, not scared at all. They checked out an unoccupied campsite even closer. 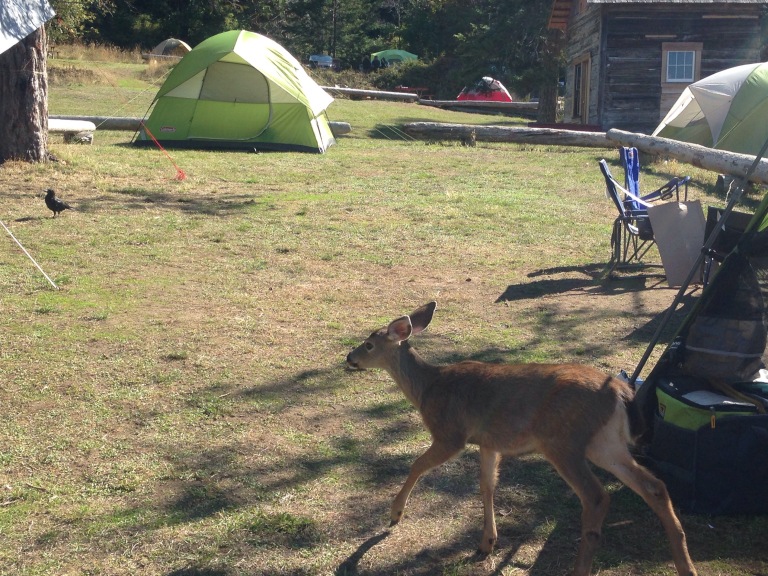 We had a fire, which felt especially wonderful after the summer long burn ban.
It started raining but it was bed time anyway. Plus there’s something I really like about the sound of rain pattering on the tent.
Day 4: Mosquito Pass and English Camp