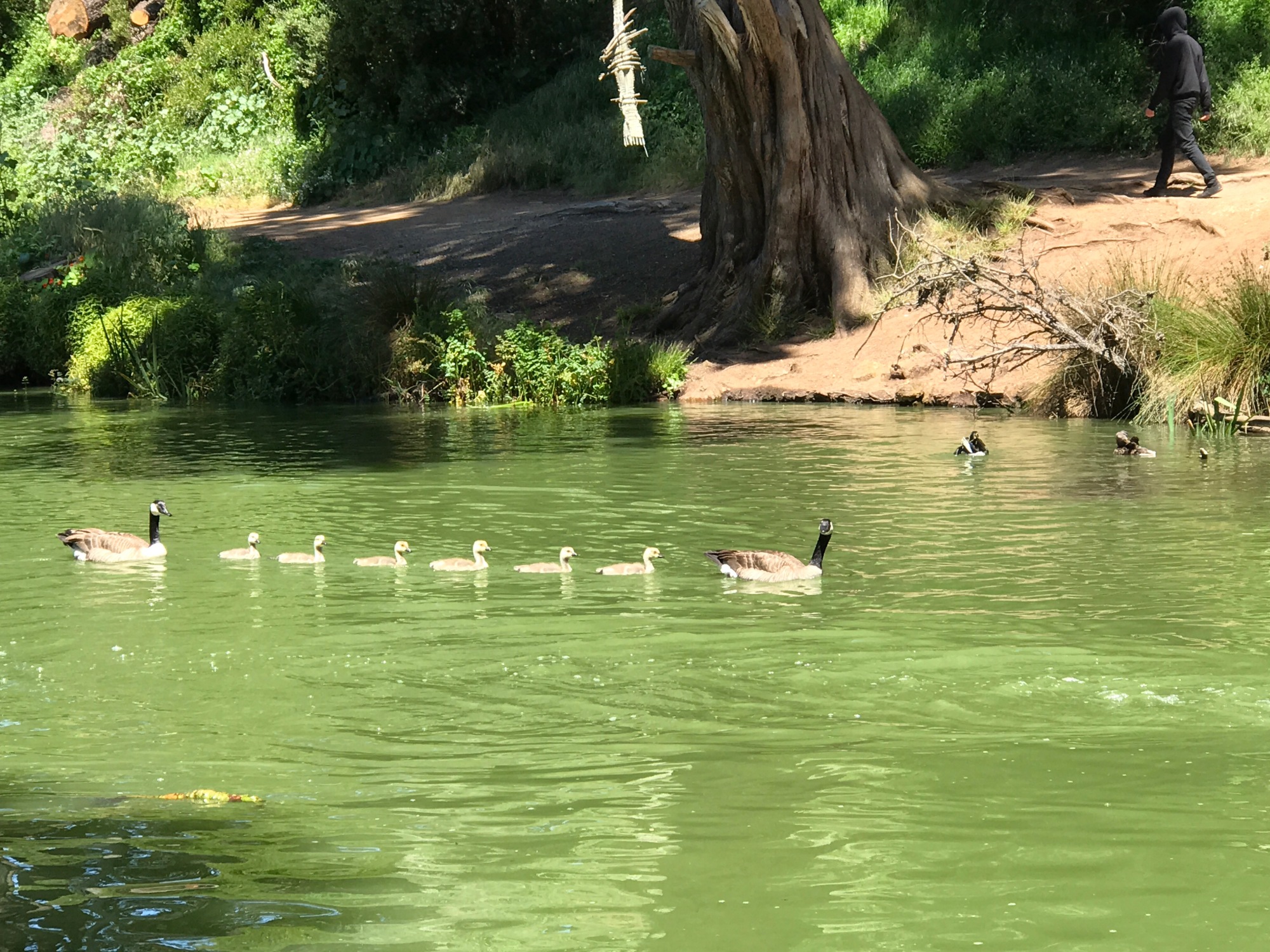 I still managed to get on the water! Despite not having a boat and traveling mostly alone with a baby.

I say “mostly alone” because Alex was in continuing education both days we were there for the weekend trip (end of April), so I spent the day hitting the town with Kaya in the stroller on our own.

On Saturday I took the Ferry to Alcatraz (the Harry Potter fan in me wants to call it Azkaban every time and I have to correct). The commentary on the tour (self-guided with head phones) was really good! Interesting facts with sounds in the background and good verbal directions on where to walk to next.

I thought it would be more difficult to travel with a stroller, but everything was wheelchair accessible so it wasn’t too difficult. The hardest part was just the embarrassment of not being able to find a seat or private area to feed Kaya when she started screaming during the tour. Thankfully I discovered I can breastfeed standing up (who knew!) in the middle of a crowd. I tried not to make eye contact and pretended to continue to listen to the audio tour while repeating to myself that I never had to see anyone here again.

Saturday night, after Alex’s class got out, we walked to China Town for dinner, yum!

We had to wait a long time to get into the restaurant but it was worth it. And we’d worked up enough of an appetite by then that we could try a lot of different things.

We went to Ghirardelli for ice cream (with chocolate on it of course). Soooo good!

Side note on getting around San Fran: I found Ubering to be the easiest for traveling with a baby. I did Uber Pool when Alex wasn’t with us (since you could only request up to two seats) and found that to be just as cheap as taking the bus and a whole lot quicker. I did practice putting the car seat in without the base before traveling (it’s a lot easier than the youtube videos make it look) so I wouldn’t hold anyone up. If you’re in this type of travel situation I highly recommend the type of stroller that just holds the car seat, so it breaks down for the trunk without taking too much room and holds your car seat so you can take any type of transportation you’d like. I like “baby wearing” too but you can’t travel in a car like that and then you don’t have the wheels to hold your diaper bag gear.

On Sunday I went to Golden Gate Park and spent the day in the sun and shade. My original plan was to go to different highlights of the (large!) park but instead I checked out the view at Hamon Observation Tower at the de Young Museum then walked to Stow Lake and never left.

I wanted to rent a row boat but wouldn’t have been able to keep my 2.5 month old upright while doing so. I also realized how many boaters had no idea what they were doing out there while I watched them crash into each other. One family put their daughter into a tree branch. Luckily it was a slow enough crash she was able to get herself as much out of the way as she could and they detangled themselves from shore without injury.

Between sitting and people watching and hiking up the hill in the middle of Stow Lake (Strawberry Hill) I spent most of the afternoon just relaxing. I was jealous I couldn’t go on the water without Alex there but it was amazing to just BE. I don’t do that often enough. Even being on maternity leave I spend most of my time DOING (housework, errands, my giant to do list that’s accumulated over the years with full time work in addition to being part of the occupational therapy board and doing continuing education and having a giant garden and…and…).

At Stow lake I just relaxed and snuggled with my baby girl and watched the boats float.