We wanted to camp but they were all too far from Alex’s continuing education course he took over the weekend so instead we stayed in the Econo Lodge & Suites (because who wants to pay extra for a roof over your head?).

It was our first planned road trip (we had an unplanned 8.5 hour road trip in the South about two months ago) and Kaya did well, sleeping most of the way or listening to Mozart. 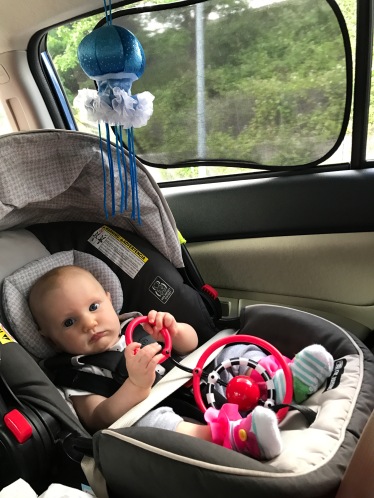 Notice the jelly fish hanging once again (the one we bought on Orcas island the day we took the pregnancy test).

Near the end she required all her toys to be brought out and annoying nursery rhymes to be played loudly (mom’s always right – she bought me a CD of them and I’ve kept them unopened in the car until then).

Friday we went to Hoyt Arboretum. Parking was $1.60 an hour. The trails were well marked (slightly disorienting to me initially, though that was likely due to my lack of sleep and skipping coffee due to the crappy hotel coffee) and it was fun to wander, looking and reading about the different trees and hearing the birds and seeing the squirrels dart up and around the trees.

I then went to REI because, well, no sales tax! I bought a hitch for the bike pull behind for Kaya and a new water bottle since I left mine on the Maui flight. I looked at the rocket boxes and baby backpack carriers but wasn’t ready to buy.

Driving to Tualatin Hills Nature Park I was so excited to get two hikes in on what was supposed to be a rainy day!

Then Kaya started to scream in her car seat on the highway. Ten minutes later I got to my exit and stopped at the first place I could. Taco Bell. I haven’t been there in years! After changing a very soiled diaper and feeding her I went in to get a taco to feed myself.

Then traffic backups started happening despite it being a Friday afternoon. There was some bomb scare (A suspicious backpack was left on a train) shutting down one of the highways.

Kaya had fallen asleep as I pulled into the (free!) parking lot for the park. So I decided to give in to my fears of sitting in traffic with a screaming child and decided to leave. Of course immediately after leaving I felt I was a failure, for fear in traffic and not trusting myself to be able to deal with the situation. That was mixed in with my feelings though, well what if she really needed the nap and I would have disturbed her?

Then, I’ll take it as a sign, it started pouring sideways and hailing as soon as we got back to the hotel.