I almost forgot about an amazing hike! On our drive in (which was amazing!) we stopped right before the tunnel.

The tunnel, by the way, is 1.1 miles through solid rock!

But before you go through the tunnel there is a parking lot and really cool hike, if you’re sure of your footing. Our guidebook said it’s “a fairly easy 163-foot elevation gain” though I’m not sure they did it because it’s more about the drop offs that would send you much further down.

Park then walk along the road (there’s a sign for the hike) then a set of stone stairs. 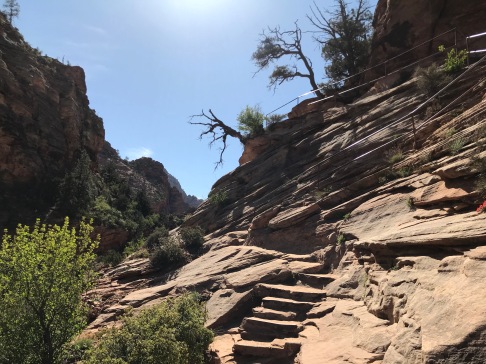 We went up a ways (Alex went the full way) and saw some really cool views.

But then we got to a narrow point where I would feel comfortable doing it alone, but not with a child on my back. I also didn’t feel comfortable having Alex do it. I trust he has good footing but I couldn’t risk seeing them both fall before my eyes, especially since we didn’t HAVE to. If that was the only way through and we needed to do it I would just take a deep breath and go for it but instead we choose for Alex took the backpack carrier off and left Kaya with me while he went ahead.

While waiting I nursed Kaya, since she was hungry/thirsty and to give her something to do that wasn’t toddling near the edge of a cliff.

There was a man who tried taking my picture, thinking I was just holding her. He got out his camera and I told him I really didn’t want a picture and he made a big deal about it (he was annoying enough about it I almost said “because when she gets distracted and pops off my breast I don’t think your wife or I would appreciate you having that picture” but just stayed firm. Later as we passed him on the trail he was standing right in the middle, taking pictures of goats, making it hard for anyone else to pass. Made me feel a little better at least that his poor trail etiquette wasn’t just to me.

The goats, by the way, were really cool to watch, because they were so active and literally leaping around on the rocks! Made me feel a little wussy about not finishing the trail, but I didn’t see any of the goats making the leaps with their babies on their backs I suppose.

Alex, who did complete the trail, brought back pictures! He said it was one of the most incredible views he’s ever seen!!