I found a toddler wet suit second hand (that, like most baby items, looked brand new) and tried it on while home. While a bit big it fit well enough and she loved it! And (spoiler alert) she loved it on the water as well. We decided if we felt we needed a wet suit that it was too cold for her but if we just wanted long sleeves she would be fine in the wet suit and so far it’s kept her nice and warm while we’ve paddled, even when she gets fairly wet from the paddle spray occasional wave (or fully soaking while playing in the shallow part of the lake).

Her little Keens were also perfect for paddling (and camping).

We hadn’t been paddling since she became so active so when we arrived at the beach (a very short drive from our campsite at Bay View State Park) we kept her in the car, happily climbing around like a jungle gym, while we took the kayak off the roof and put the gear in. 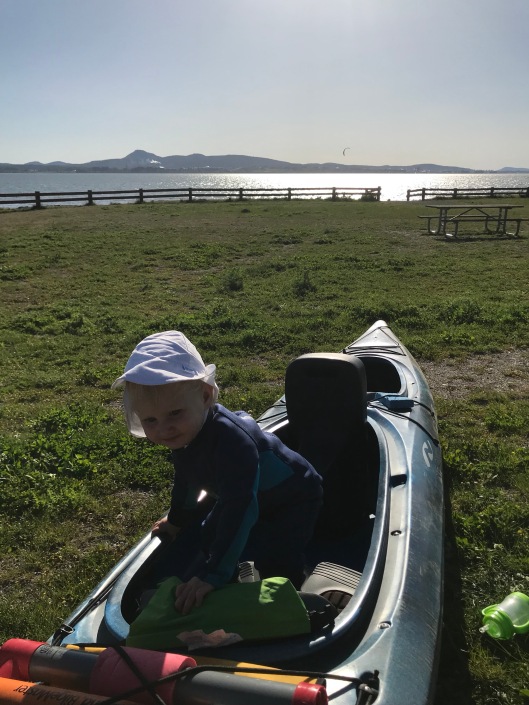 We then stuck Kaya in with the rest of the gear and each took an end of the kayak and carried down to the beach.

It was our first time in the Puget Sound with her (we’d only done lakes before) so I was a little bit nervous. She was so excited to be out there and spent a lot of the time just leaning over to splash her hand in the water. So we didn’t get very far! But we did get to paddle up and down the coastline a bit on Padilla Bay.

It was a nice day (a little chilly overall since it was May) so the water was calm, though we did have to battle the winds a little bit and ended up with a a larger wave that went over the front of the kayak and soaked me and got Kaya’s and Alex’s legs wet.

The wetsuit allowed us to paddle on the good but not hot day for Mother’s Day. Kaya didn’t seem cold despite the wind and wetness for the hour ish we spent out there. As soon as we got in the car we got her thoroughly dried off and into long sleeves just to be safe but she never seemed to mind the temperature.

2 thoughts on “Paddling﻿ Padilla Bay with a 15 month old”