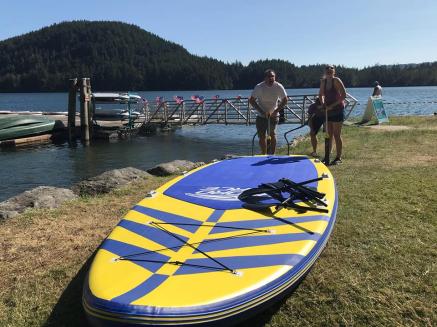 You know how at Costco everything is bigger? Well so are SUPs! It takes two pumps and a lot of work to blow it up but it doesn’t take too long (I think it took us 15 sweaty minutes, switching out with three of us on one pump and Alex on another) and then it was stiff as a board (does that count as a pun?).

Taylor, my sister-in-law, got excited about getting out on the water (it was a hot day on Orcas Island) and jumped on. Since we didn’t know we weren’t holding onto the board so she started quickly drifting away from the dock. We threw a paddle at her and she slowly brought the 17′ board back so we could jump on as well.

We took it out for a spin first to check it out then came back for Kaya and Dasha (also a sister-in-law, it was a full family affair, after our family reunion (to Discovery Bay and Orcas Island) where we stayed a few days extra). Dasha kept an eye and hand on Kaya while the rest of us paddled across the lake in Moran State Park.

These pics were taken by my dad from the shore so I don’t have pics of the rest but across the lake, not really visible but something we knew from a previous kayaking trip (which has pics in that post), is across Cascade lake there’s a little branch off that has a bridge where people can jump off from the middle into the lake. My brother Dan jumped off then swam back to the SUP. In today’s world this is a big feat. Doing something daring just for the thrill of it when you know you aren’t going to have anything to post on Facebook later 😉

I didn’t even think of jumping off, not for lack of pictures but because I prefer to keep my head above water at all times. Which is why I do many water sports but have only done scuba diving once and that was only because we were in the Great Barrier Reef in Australia.

Just a side note, Dan and Taylor took the SUP a couple more times out (since it’s at their place) and the second or third time out it actually already has a leak. So there’s that…they weren’t able to find the hole to put the included patch in it yet and we haven’t contacted the company yet so who knows what will happen, but if we don’t get it repaired that was a very quick grand spent by my parents!