We got on the Celebrity cruise ship. First stop, Livorno, Italy. Never heard of Livorno? I hadn’t either, but I still haven’t seen much of it since we drove straight to Pisa.

After standing in line at the ticket office for a while we left our stroller, backpack, and toddler with the grandparents (no kids under 8 or bags allowed) to climb up the stairs up the leaning tower. It was trippy! To have steeps narrow steps with slopes in the middle from heavy use, on a leaning tower, as you go in circles going up… is a unique experience! I could see then why young kids couldn’t go up. I wouldn’t have wanted to carry my toddler up, even in a carrier, and be that off center. Very cool experience though, walking up then a good view from the top and some venerable looking bells.

We thought we were on the top and looked around and took a few pics. Then we found the next set of stairs! There were much less of these (thank goodness) and I really liked this viewing area; basically a platform with bells.

We also went into the church but because we went up the tower we were separated from our group and didn’t get into the church on the group ticket. I highly recommend splitting the ticket for the Church because even though it’s free you have to go to the ticket office for your timed ticket and if it’s one thing I’ve learned now in my time in Italy is they do not believe in leaning (pun not intended but left intentionally during this proof read). even slightly away from rules. I’ve heard “not possible!” so many times from many angry older men taking tickets. It wasn’t until everyone on our ticket came back out to the entrance (not just my dad holding the ticket who had told him that we were going to come in later… and he didn’t bother telling my dad then that he was going to refuse). Talk about a power trip! Good job saving the world blocking the free ticket entry!!

Sorry, my millennial was showing. Or in this case, basic manners.

Anyhoo! The church was pretty and interesting to see as well. 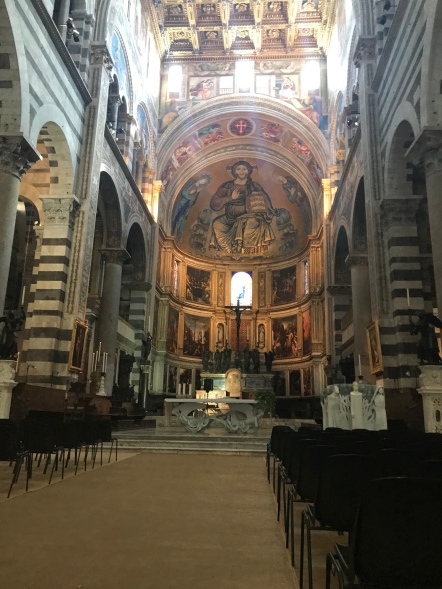