We finally got a (secondhand) suitecase for Kaya. It’s great! I wasn’t trying to jam both kids stuff into my suitecase and hold onto loose ends like a blanket for the plane (and her dolly). Her change of clothes, snacks, toys, iPad, headphones, etc. all went into her bag, and she was proud to have her own stuff in her own bag under her own seat.

A friend dropped us off at the light rail station where we took up an entire luggage cubby to ourselves between the suitecases, backpacks, pump bag, stroller, and two car seats (stacked together inside the stroller for compactness). For more info on traveling with kids car seat age read to the end*

It was nice to not be on at a crowded time and start at the beginning so we could easily get seats. When I’ve used this for commuting during rush hour it’s jam packed / standing room only with nothing to hold onto. That wouldn’t have worked with the kids or all the luggage etc. but this was a Saturday late morning. 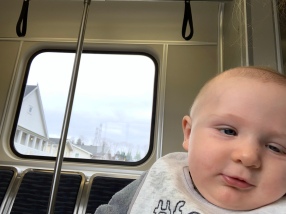 Once on the plane (because it happens that casually, right?) Kaya got her iPad and new headphones. I’d lost her headphones on another trip and been using a corded phone headphone but then she had to hold onto it. These headphones are a soft headband (adjusted by velcro). She wore them a lot of the flight and there were no complaints (these are the Charlxee Kid’s Headphones).

Of course on a six hour flight even a toddler excited about watching her shows (which she otherwise only gets when I’m in the shower or car rides over an hour or two) can’t watch the whole flight. At about hour four there were some climbing needs that weren’t being met so I let her climb on me a little bit and up the backs of our chairs for a few minutes (obviously not the chairs in front of us!).

Another activity she liked was our wipe clean travel books from Usborne Books & More (I became a consultant briefly to build up my own collection).

Then back to more iPad. We landed with our sanity mostly intact.

*If you want info about traveling with kids in car seat age read on: I know there’s an online stroller / car seat / getting to the airport threads that pop up frequently with “should I bring a car seat?” “should I bring a stroller?” “how do you get to the airport with two kids in Seattle?” My summary of traveling with a toddler and baby (which of course needs to match your situation, but I’ve been in a lot of situations in many countries and states and this almost always works for me) is bring the car seats for safety (and naps on the plane for any child with their own seat, which I like the Cosco Scenera Next for for it’s lightweightness and airplane symbol to show it’s okay on the plane) then check the other car seat for the lap child and hope they take good care of it) and when traveling stack them inside each other inside the stroller and put your backpacks on top of it (the Maclaren Triumph single stroller has consistently held as many pounds as I’ve put in there with heavy use in many countries, I have an ’08 I got secondhand) and put your baby in a carrier. My husband can carry our toddler if she gets tired but if I didn’t have that I would get one of those standing boards that attach to the back of the stroller. This makes traveling through the airport so much easier, then gait check the stroller (plan for carrying out if you’re flying to another country, just FYI, since the strollers end up with the luggage, but if domestic it’ll be there as soon as you’re off the plane. Oh, but if you are flying out of country they also have larger bins that the stroller can fit into potentially and/or one spot if you ask an attendant to store it). Also, get TSA Pre (for domestic for adults) or Global Entry for everyone (for international and domestic) for much easier security lines and allow lots of extra time at the airport for slow walking, stopping, diapers, and no stress (because when did toddlers actually speed up vs slow down when you are in a hurry?).