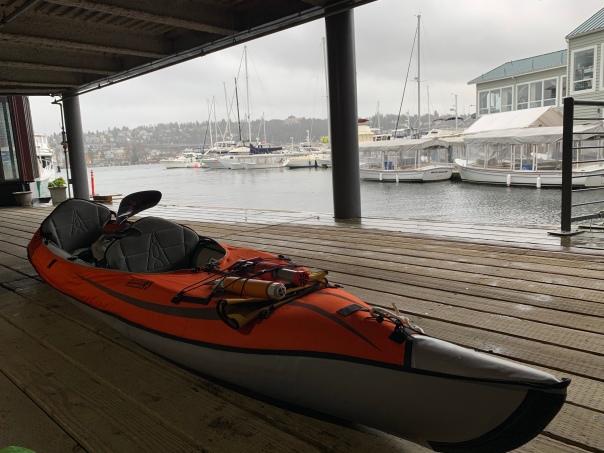 Setting this kayak up the first time, in the kitchen, at midnight, was rough (if you’d like to subject yourself to that experience click here). Setting it up our second time, on the dock, with the kids safely at church with the grandparents…a breeze! We didn’t even use the electric pump, just did the double Advanced Elements pump (where it pushes air when you pull up or push down). After getting everything down there it probably took 15 minutes and I think we could get it faster since that was only our second try.

We did forget to put the foot pegs on but rather than lose precious paddling time (we had to be done by the end of the church service social time afterwards) by deflating everything to slip those on we went without. If we were paddling for a longer period of time I would have wanted them though for sitting in front. Also, life advise, maybe try to hide your glee when you tell your pastor you’re just there to drop the kids so you can skip church for paddling… instead take a moment to explain the joy he sees on your face is actually just the anticipation about enjoying nature and time with your hubby…

We launched from our usual spot onto Lake Union, at Northwest Outdoor Center (if you need to pick up anything for kayaking, rent kayaks, or take classes, I’d highly recommend). It was windy, which was perfect for seeing how an inflatable would do (really well!  We did have the backbone in). 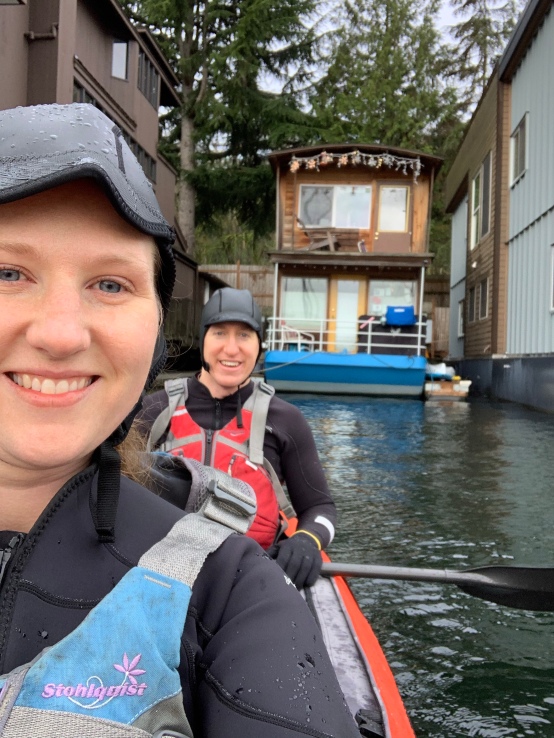 Because it was windy and we hadn’t found our gloves and it was cold, and on a new kayak, we weren’t going for speed or distance. Instead we leisurely paddled around looking at the cute houseboats and dreaming of being able to retire here (in dreamworld we talked about a houseboat, in practical expensive Seattle world we talked about one of the apartment buildings with boat parking right on the water). 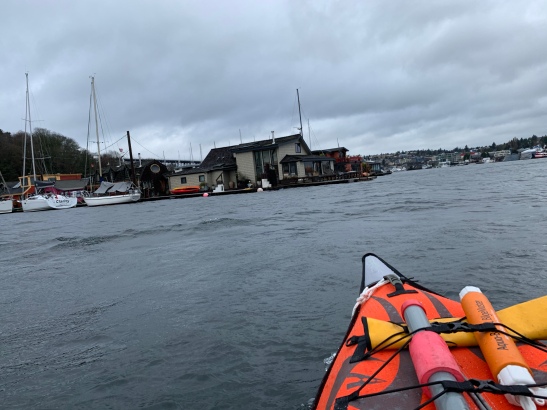 It had been raining all morning but stopped as we were unloading, so we had the lake to ourselves! Especially in the summer Lake Union can get really crowded (self propelled, motor boats, sail boats, commercial boats, and float planes) but for our hour plus paddle we saw one commercial boat and one float plane. Except when we launched and saw two of our Pancake Paddle buddies (one on a SUP and one a kayak) coming in. We knew we might run into them but timing wise maybe wouldn’t get to paddle together. We probably wouldn’t have seen them at all except they came in early due to the winds.

After checking out the houseboats we paddled back past Northwest Outdoor Center to the Southern end (by the Center for Wooden Boats).

I feel like this pic represents Seattle currently: unique (Space Needle), gray, and under construction.

By the beach area (by Kenmore air) we saw these unique (Coyote?) signs. I’m assuming to get people to notice they should stay out of the way of airplanes but I’m wondering a) if there’s more of a story to that / who on earth thought of those signs? and b) if they work (they caught my attention but then I wanted to get closer to check them out…). 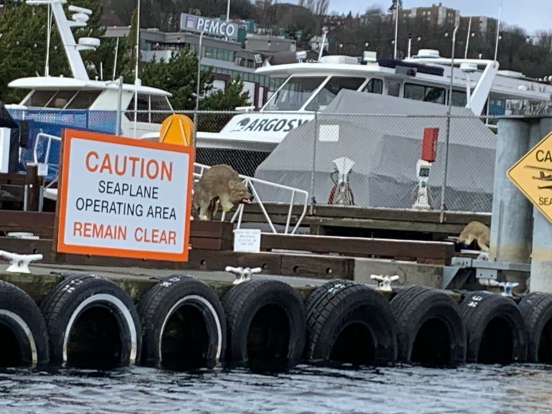 Another story I’d love to hear is what it’s like to live on this house boat. I’m not great at guessing but this is what…a hundred square feet? There’s a hammock inside so the bed doesn’t take up any space and a kitchen. The person sleeping in the hammock lives there I assume (at least on the weekend). I forgot to look at the city name to see if they are from Seattle or travelling. It would just be really fun to hear their story and what daily life is like, and where they’ve travelled in their house boat.

Once we got back to the dock we took out Alex’s seat and clipped mine to the middle. I wanted to see what it was like to paddle as a single (thus the convertible part of the name). I’d say in calm waters I could do it but not for a long distance in winds (though didn’t have time to really test this). Our plastic kayak can be paddled as a single as well (Alex has done it when we’ve kayak camped and unloaded gear in one area then brought the kayak up to park in another area) but I can’t lift it on and off the car anyway so it doesn’t matter much if I can paddle it. The inflatable I can lug out myself (though would need a wagon or dolly if too far). The only thing I wish they would have changed is for the carrying case to be like a backpack, since it’s large and relatively heavy, for better weight distribution for ergonomics while carrying and to free up my hands for carrying my paddle etc. to cut a trip down. Alex and I found carrying it upstairs (since the Northwest Outdoor Center is down a flight of stairs from parking) was easier with it inflated, so we could hold the ends and carry it together, then deflated it in the parking lot.

The kayak then went back to our kitchen to dry overnight (after I did a quick wipe down with a towel) before another wipe down just to be sure before folding it back up and putting it in the shed.

I’m really excited about using this kayak in the future (mostly as a tandem and occassionally as a single).